The purpose of the white paper is to ensure that more than 300,000 new homes are built in England per annum.

We agree with the objective to provide everyone with a home but the obligations in the white paper are entirely on local authorities and the benefits are entirely with the developers.

Currently, there are more than one million homes with planning permission across England that have not yet been built. This is the equivalent of over three years’ requirements.

The white paper increases the number of homes to be built each year by more than 80,000 compared to the current method of calculation. Within that figure, there are a substantial number of houses to be built in the hope that having excess supply will cause average selling prices to come down. This though is not in the developer’s interest and evidence suggests that they stop building houses when their selling prices and therefore their profits are at risk.

The target numbers are also based on expected future need and ignores the number of houses already approved in an area, the number of houses currently available in an area or the type of houses actually required in that area. It means that a developer can build high-profit three- or four-bedroom houses in a town, even if what is required is much less profitable one or two-bedroom flats and starter homes.

The proposal puts the majority of the housing requirement in the South East, which is totally contrary to the Government’s ‘Levelling Up’ manifesto promise.

The proposal also anticipates that developers will not build at the required rate and therefore obliges local authorities to grant excess planning applications to ensure their house building targets are met but without any pressure on developers to deliver what they planned.

We the undersigned demand that:

We want a fair planning system to agree housing requirements with local communities, rather than government-imposed numbers which take no account of local needs and factors, the environment and congestion. 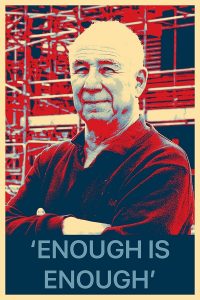